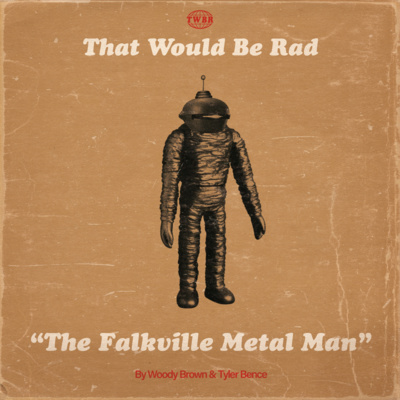 This week Tyler pulled a fast one on Woody by surprising him with a totally different episode topic. This is, of course, after both he and Woody had decided on a topic, prepared for the show, done the research, and clicked the "record" button...
Although traditionally Tyler is pretty bad at spoilers, he kept this one close to the chest until the very last minute.

This week we talk about The Falkville Metal Man (sometimes referred to as the "Metal Man of Falkville" or "The Alabama Metal Man").

This super rad story took place in the fall of 1973, about an hour north of Birmingham, Alabama - in a small town called Falkville.
Late on the evening of October 17, 1973 - the off-duty chief of police Jeff Greenhaw got a telephone call that would change his life forever...
A hysterical anonymous woman on the phone described witnessing some sort of UFO landing in a field just outside of town. Even though he was off-duty, and had just kicked off his shoes and sat down for dinner...he rushed out the door to protect and serve.

Jeff Greenhaw didn't see a spaceship that night upon investigating, but instead something he would later regret seeing...

Join us in this episode as we dive into the details behind this fascinating tale, how it all ended up affecting Jeff Greenhaw's life, and what we think REALLY happened that night in Falkville, Alabama.

Thank you for listening and as always - BE RAD!