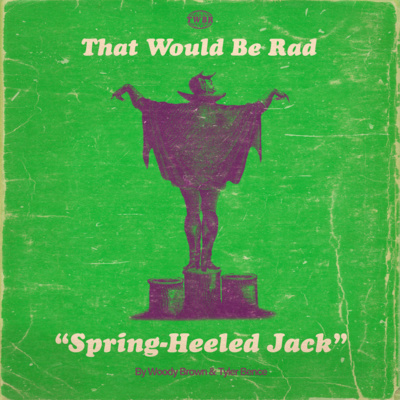 Well before the streets of London were terrorized by the murderous "Jack the Ripper"...or even before the criminals of Gotham City were terrified of a winged figure lurking in the shadows...there existed a creature/being/assailant called - "SPRING-HEELED JACK".

The 1837 dimly lit cobble stone streets of Victorian England would have been spooky enough but, when women began being attacked at night by a  mysterious shape-shifting figure, ghostly in appearance, and with gloves in the shape of claws - a panic swept the country.

With reports of Spring-Heeled Jack being able to breath blue flames, leap over 9ft walls with no issue, and the ability to never be caught - it's hard for us to not immediately picture a steampunk Batman-like figure who was way to "handsy" making his way through London.

How did these sightings/attacks happen over the span of so many years?
Was it just one person who was some sort of deranged inventor getting his kicks by terrorizing others?
Was it some sort of dark, secret society whose initiation involved some sort of terroristic outing?
Or was it a group of copy cats who kept this legend alive as recent as 2009?

Join us this week as we explore the strange mystery and legend of Spring-Heeled Jack.